In 1957, a new building was erected that was used specifically as a bakery for the Sisters of St. Mary’s growing altar bread business. The Sisters, and their helpers, the “Associates”, generated income by making altar bread/communion wafers, and supplying it to other church communities around the world. They had so many orders worldwide, that they often spent $200 a day on postage.

The altar bread making was done in a large one-story rectangular building behind Kemper Hall with a view of the shoreline.

Kady B. Faulkner, Chairperson of the Art Department for the school and watercolor artist, created a mosaic mural on the west wall of the building as a lasting memorial to the Sisters of St. Mary. She collected thousands of stones and pebbles, colored marbles, and pieces of glass during the winter months. In June, when school ended, she would build the mural between 6:00am and 11:00am, stopping when the noon sun made work impossible.

She began the mural in the summer of 1962 and completed it in 1964. The mural depicts the making of altar bread and wine.

“The blue that runs across the bottom is the ‘River of Life’; the figures – the workers for the saving of Christ’s kingdom; the fields in various stages – before planting, early growth, completed growth, and the harvested fields. The north end is representing the wine industry and much of the same symbolism carries through this portion. Along the top, and on the pilasters, are the signs and symbols of the church. While I took a lot of time, it was a lot of fun to do. Before this time, I had done a number of murals in churches, schools, and a post office, but this is the first time I did an outdoor one using different types of materials. It was really exciting.”
-Kady Faulkner 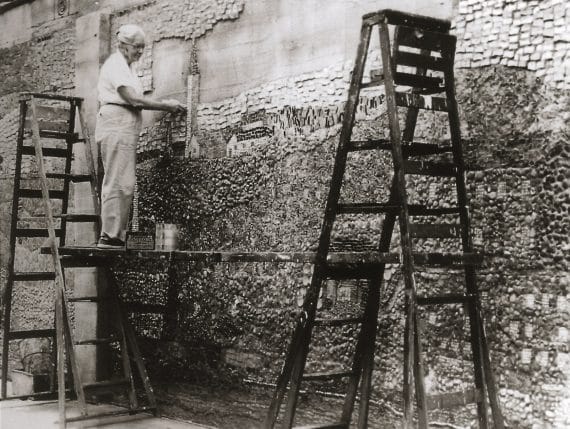