Charles Durkee, a native of Royalton, Vermont, and his bride Catherine, came to Pike Creek (Kenosha’s original name) in 1836. He built a log cabin of oak and black walnut in the area that would later be called Southport, and later still, Kenosha. The Durkees loved the area and bought land extending from the center of town to the lakefront. Their happiness, however, was to be short lived. His 25-year old wife fell ill and died in her new home.

Charles filled his time with business and political activity and soon became the largest landowner in the area. He made land available to newcomers at modest prices and on easy credit terms. Called “the working-man’s friend,” his keen interest in politics and his ambitious plans for Southport led him to spearhead the efforts to have port facilities in the town.

When Wisconsin gained territorial status in 1836, Charles became one of the members of the legislature. He was instrumental in selecting the location of the Capitol and in helping to develop a school for the area.

He served in Congress from 1848-1853 and in the U.S. Senate from 1854-1861 where he championed worker’s rights and fought for progressive homestead laws. After his return to Kenosha in 1861, Senator Durkee began construction on a new cream-brick, 10-room Italiante Victorian mansion on 10 acres on the shore of Lake Michigan, with his second wife, Caroline. The home consisted of a ballroom, a widow’s walk facing Lake Michigan, and an ornate wooden porch, which wrapped completely around the home.

In 1865, while Senator Durkee was attending President Abraham Lincoln’s funeral in Springfield, Illinois, the new President of the United States, Andrew Johnson, appointed him to the governorship of the Utah Territory. After living in the home for four years, Senator Durkee agreed to sell the house and property to St. Matthew’s Episcopal Church in exchange for a lifetime annuity for his wife Caroline.

The church began adding new buildings to the Senator’s home in order to develop it as a girls’ school for higher learning, an Episcopal Female Seminary. The ballroom was divided into smaller rooms to accommodate a total of 27 girls. In September 1865, the property was mortgaged for $4,000, and the money was used to add an east wing to the mansion, containing the dining room and kitchen on the first floor, classrooms on the second, and more dormitories on the third.

Many other changes were made to the mansion; however the free-standing suspension staircase in the foyer remains today, as it was when the house was first built.

In the 1860s, the pantry had a trap door to the root cellar where it is rumored that it was used to provide safe haven to runaway slaves during the Civil War. 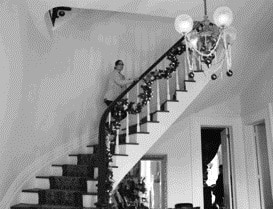 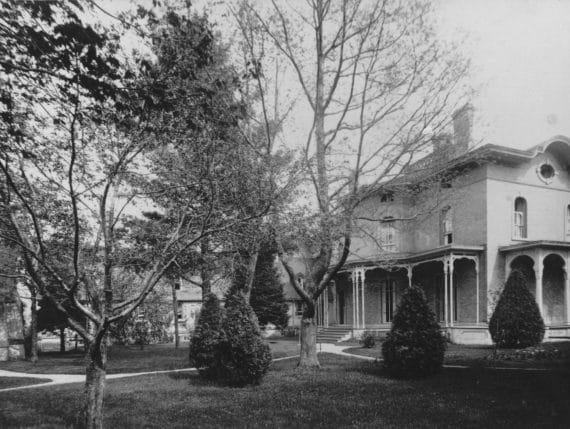