The Sisters of St. Mary, who administered and taught at Kemper Hall, lived in St. Mary’s Convent, built in 1911.

The first floor of the convent was a gathering place for the Sisters with pocket doors that divided it into two rooms. The Sisters would eat their meals in the east room facing the Lake in silence. The west side was the recreation area for the Sisters to read, darn, or mend clothes during what little time they had from their daily duties of prayer, teaching, and managing the school.

The small kitchen towards the back of the convent was used for light meals, while heartier meals were prepared in the larger kitchen located in the convent basement.

The second floor had several rooms for elderly or infirmed Sisters and a large chapel for those Sisters who could not make it down to the school’s chapel. The third floor had rooms for young studying postulants.

The convent basement had rooms for storage and doing laundry, and an elevator that could carry you from the basement to the third floor. The basement was also a sanctuary for people in need of safety. When these people arrived, they were given food and a bed in the basement. An underground crawl space connected the mansion to the convent.

The north cloister, also referred to as the Red Brick Cloister, connects the convent to St. Mary’s Chapel. The cloister is dimly lit, with muted sconces and deeply colored art glass windows. Hidden behind the arched French doors between the convent and the cloister, is a heavy wooden door barely noticeable in the darkened hallway. This doorway hid a narrow, dark staircase that went upstairs to the Sisters’ private chapel on the second floor. This was used only by a priest or a doctor to get to the chapel to administer the Sacraments to any elderly or unwell Sisters.

The convent served as the Mother House for the Sisters of St. Mary until 1974. Today it is named Ambrose Hall, in honor of Sister Mary Ambrose, who was the Mother Superior for over 40 years. 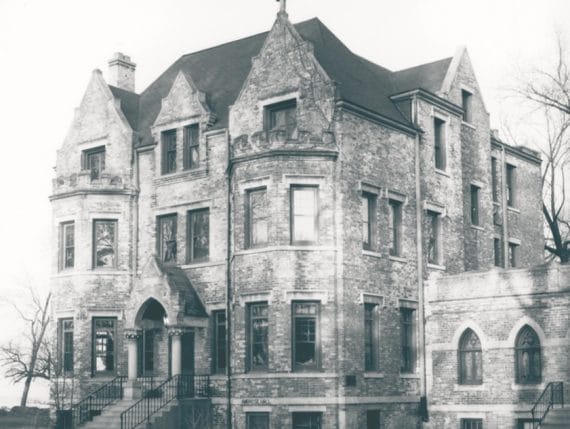